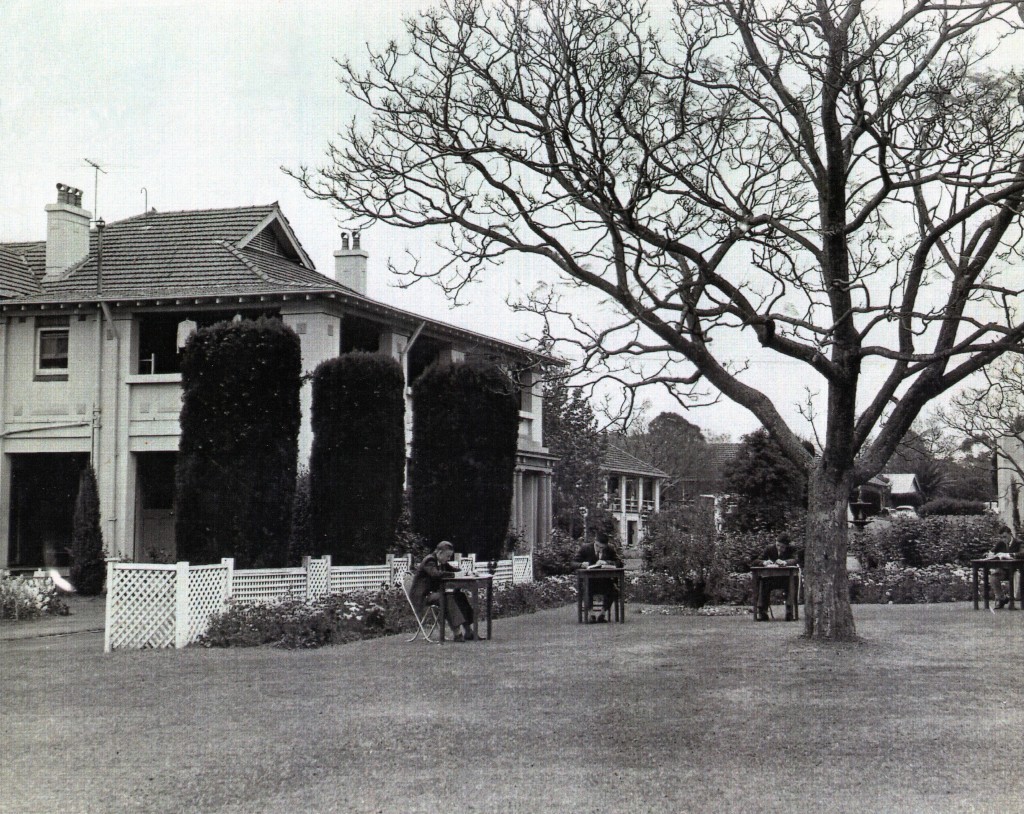 The land had been owned by a Pitt St. Minister, Reverend John Graharn and when he wished to return home to England in 1874 he sold the land to John Kinloch, a teacher who had been born in Dublin, Ireland in 1832. His father, a Scotsman, had been a piano tuner whose work took him across Britain. On one trip to England he met and married Helen Hurlstone.

John Kinloch had been one of the first graduates of Sydney University and was earning a living as a tutor preparing students for university matriculation. He was also a keen sportsman and played cricket for NSW. In 1859 in a match against Victoria he took 8 wickets for 70 runs over two innings. He bowled ‘straight, swift, underhand grounders’. (Much like Glenn McGrath, but lower.)
He had a lifelong ambition to set up his own school and this he did in 1878. He had named his land the Hurlstone Estate after his mother who had died of influenza in 1849 when he was only 16. He also named the school after her: – the Hurlstone School and College. Four acres were set aside for a house, school, cricket and gymnastic grounds and 16 acres for recreation and a pony run.

Subjects at the Hurlstone School included English Grammar and Composition, Reading Aloud, Mathematics, Physics, Bookkeeping, Gymnastics, Surveying and French. Resident boarders had to pay 150 pounds per year (about $300). This was a lot of money when the average wage was about $200 per year.

Within two years Kinloch was forced to sell the College. He couldn’t attract enough students to make the school pay. Perhaps the price was too high and the school was quite a distance from the university and public transport was not available.

To get his money back Kinloch planned to break the Estate up and sell it in residential blocks. However the NSW Government bought up the whole area and Hurlstone School and College became Hurlstone Teacher Training College of Female Teachers for the next 24 years.

By 1907 the NSW Government wanted to give the community an agricultural school to allow ‘more of our people to fit themselves for the agricultural life.’ The government decided to use the vacant Women Teachers’ Training College at Summer Hill on the old Hurlstone site for this purpose. Sydney Teachers College had been established in 1906 and the female teacher trainees had moved there. The 27 acres near Ashfield Railway station seemed perfect for the new agricultural school.
The new school was called the Hurlstone Agricultural Continuation School; it was for those who wanted to continue their schooling after primary school. Large numbers of children in those days did not continue schooling after Year 6. In 1910 less than 5% of the school population in NSW went to schools which were after primary level.

The course at Hurlstone was only for two years. The purpose of the continuation school was ‘to prepare students for farm pursuits and for admission to Hawkesbury Agricultural College’. This was revolutionary at the time – no other school in the state had courses in agriculture. Farming was considered to be something you learned at home, not in the classroom.

The first Principal was Frank McMullen who had taught for 20 years in various NSW schools from Broken Hill to Lindfield. He had no experience in agriculture yet managed to draw up a syllabus for the agricultural school. His wife ran the boarding school and all Hurlstone teachers were expected to live in and supervise the boys outside school hours. They were not paid anything extra for this.

Return to top of page

We would like to pay our respects and acknowledge the traditional custodians of the land the Dharawal people and also pay respect to Elders past, present and future.

Copyright for this website is owned by the State of New South Wales through the Department of Education. For more information go to http://www.dec.nsw.gov.au/footer/copyright.